I finally finished my trade school education in late spring
of 1994. I had done really well, and passed everything with
good grades. (I don't think we were graded with letters, but
you get a certificate. I think I aced everything).

True to their word, they enrolled me in a placement service
so I could go out and get a real job for a change. I was
hoping to get an entry-level job working as a network engineer,
but my Novell training was not complete yet. But I did get an
interview with a company called G-Tech.

G-Tech is the outfit that manages the lottery machines in many
states...I am not sure if they do ALL of them, but they did in
California, and I know they do here in Texas as well.

I remember that I arrived to the interview very early, so as
to not take any chances, and due to my heavy schedule, and me
being tired all the time, I took a little nap in my car while
I waited. Can you believe that I almost over-slept and was
nearly late for the interview? I woke up just in time, but
I bet I appeared pretty groggy during the interview!

I guess they liked me, because I got hired...and a great job
it was! (In fact, had we not moved to Texas, I may have still
had this job today...but that part is coming).

It seems I must have secured this job in early Summer 1994,
because I know that I had just completed my training when I
came home one day and the OJ Simpson 'low-speed' chase was on
the news, which would have been June 17, 1994.

(This was also around the time my seventeen-year old cat died).

This job was pretty good in lots of ways. First, we all had
a company van to drive, because we were loaded up with computers,
TV monitors, and a myriad of spare computer parts and hardware.

We installed, maintained, and repaired the little lotto machines
that are so common on the counters in bars, liquor stores, markets,
and various other businesses. We also were responsible for the big
self-service 'kiosks' in many supermarkets...the ones that would
actually print a lottery ticket, or dispense the 'scratcher' tickets.

We all had fairly large territories to cover, and we would hit each
business once a month for general cleaning and maintenance, or
refilling supplies. If something broke, we got paged out to take
care of it, so if I was not actually working, I was always on-call.

My hours were nights and weekends at first, but after working
there for some time I managed to get a normal day shift...but I
was on-call as well, so if something broke in the middle of the night,
I would have to take that service call.

Now, I have to dispel a myth that some people just can't grasp. As
employees, we were forbidden to play the lottery, because if we won,
we would have been in-eligible to take the prize. Of course, we
still played, it was just common knowledge that if we DID win, we
would just give the ticket to a trusted friend, and take it from there.
My bride was not eligible either, but my father-in-law would have been
legal to take the prize.

But remember...the lottery numbers are drawn randomly by selecting
different balls...there is no way to know beforehand what the numbers
will be. I was surprised at how many people I encountered every day that
thought they were being cute when they asked me to 'give' them the
winning numbers! Now, if I could really do that, don't you think I
WOULD have given them to my father-in-law?? 'Nuff said about that.

Anyway, I turned 38 that summer, and was enjoying the job...really!
My territory was vast...since I lived in the high desert, I had a
southern territory in the Valley, and a Northern one that stretched
into Central California. I had one account in Bishop...which was about
250 miles north of where I lived...and if I had a call going up there,
it shot the whole day. This was not bad at all...where else can you have
a job where you drive a company van for 4 hours...get to an account, spend
an hour there, and then drive home for another 4 hours? 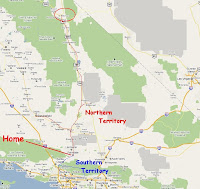 One day while driving up Interstate 5 into Hungry Valley (Near
Lake Castaic), after servicing an account, a heavy, cold, icy fog
descended on the area. While attempting to drive home, a pretty
major chain-reaction accident occurred just a few car lengths in front
of me. The entire freeway had to be shut down for a few hours, and
as I recall, there was at least one death.

If I had entered the freeway just a minute or two sooner than I did,
I could have missed all this and would have been on my way...OR...I
could have been involved in it. I considered it my lucky day.
I shot some video of the aftermath, it was quite a scene.

If the video below fails to play, you could also try this link

This was all during the midst of the OJ Simpson trial, which was
broadcast on our local AM radio station, KFI, all day. I used to
love getting these long-distance incidents, as the signal from
KFI was strong enough that I could hear it for most of the trip,
and I was provided with much entertainment during these long drives!

In the meantime, I finally finished my Novell exams, and passed, so I
was now a Certified Novell Engineer, which I hoped to use to advance
my career.

I worked with G-Tech until October 1996, when we moved to Texas.
So, as you will soon see, not only did I end up unemployed again,
but in a completely different state...so my endless progression of
jobs is not done yet...I still had a few more to go...