The Daughter and I arrived in Las Vegas on Saturday, March 13.
We proceeded over to National Car Rentals to pick up our vehicle.
Since it was my sister's birthday, at The Daughter's urging we
opted to upgrade to a white convertible, since I had always
wanted to drive one, the weather was promising to be great, and
it has been a dream of my sister to someday own one.

As it turned out, while the convertible was cool, there were some
downsides to it, and we were able to learn all that without the
expense of having to purchase one.

For one thing, while we were initially impressed on the size of
the trunk, once we opened it, we found that the bulk of it was
not usable...it HAD to be huge because that is where the top
gets stored when it is down. We really didn't have enough
room in the trunk to even put our suitcases in. So, into the
back seat they go.

So The Daughter and I head to my sister's house, we put the top
down, as it was a glorious sunny day. It was fabulous to cruise
down the highway with the sun shining on us, radio blaring, and
pretending that we were cool.

I found it was odd that to put the top up or down, you have to
keep holding down the button, or it stops. I would think that
once you hit the button, the operation would complete without
having to do this. Oh, well, a minor inconvenience.

Here is a picture of The Daughter with the top going down.
Notice that as the top retracts, it is going into the trunk, and
that is pretty much all the trunk is good for! 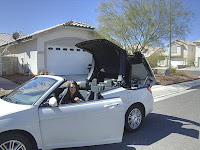 Here is a shot of The Daughter and my sister in the convertible,
and then one with me included: 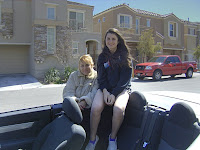 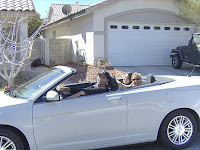 A few pictures of the eclectic decor of my sister's house: 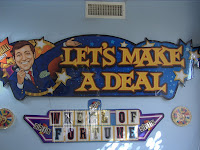 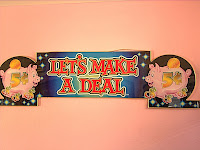