Since I don't have anything else ready to go today, I
thought I would dump a few more of these digital pictures
on you. This is just a mish-mash of random stuff that I was
not able to categorize.

This first one is called The Warehouse, and it was one of
the first things I ever tried to create. Notice how large
the size of the little candies are...as you know, these
things are pretty small, but after I finished this, I
realized the apparent scale of them is pretty big.
Oh, well...
(Don't forget to click to enlarge, blah blah blah...) 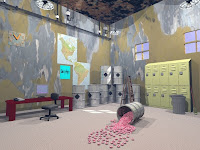 This is Joe's Burgers...I tried to create a little city: 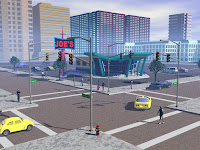 This is two versions of Joe's Diner, one without fog, and
one with fog: 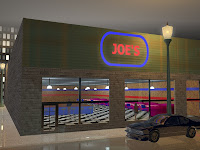 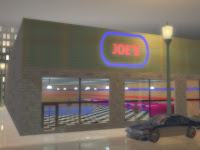 This last one is pretty interesting. It is supposed to be
someone wielding a screwdriver on a live circuit board,
which isn't normally a very good idea.

Notice the flame where the tip of the screwdriver is
touching the board. I also tried to make little sparks
coming off the screwdriver, but it does not look very
realistic.

The hand in the picture is my actual hand.

If you look through the window where the van is, the real
scene BEHIND the van is the actual view of the house across
the street from our house. This is what we really see
looking out the window. (Minus the virtual van, of course).

The font of the lettering on the van that says 'Joe's
Computer Repair' is in Comic Sans MS...which is my favorite
font. I use it on everything. 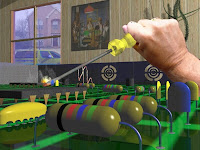