Too much Photo Manipulation?

Well, my friends, the road trip continues...and again,
I find that I have added new followers by not really
being here! I don't understand how that happens, but
I can't argue with it.

We had a great time in Red Rock Canyon, and we spent
Monday night driving back and forth across the Strip in
the convertible. The cool part was, we didn't even have
to park or get out of the car. I was able to get all the
pictures I wanted just by sitting in the open-air car.

This was the one time I was glad for huge traffic jams,
as being stuck at a red light was the perfect chance for
me to snap some photos without worrying about it
taking so long.

Driving to California yesterday was also very nice, and it
was a huge pleasure to stop at In-N-Out on the way!
I have photos of all this, I was able to download them onto
my mom's computer, but they are not ready to be posted.
I need to be at home to 'clean them up'. Some are too dark,
some are not balanced correctly.

This will give me something to post when I return home,
and make them more presentable.

In the meantime, speaking about photo manipulation, I
want to say that unless I am trying to be 'artistic', I really
try not to go overboard with it.

A lot of times, photographers are tempted to over-do their
images in Photoshop, and sometimes I am guilty of that. I try to
only do very minimal adjustments, such as correcting some
lighting problems or some color balance errors.

If I am going to do a lot more than that, then the end result is
going to be more of an artistic venture, and it will be
obviously manipulated. But sometimes that is OK.

So I found this old boring snapshot of our house taken a few
years ago. I started wondering if there was anything I could do
to make it more appealing if I really worked hard on it.
Here is the original: 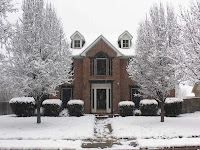 The first thing I did was to run a de-noiser on it.
Next, I ran it through the unsharp mask filter.

I adjusted the curves and the levels a bit, but then it was too
bright.
I darkened it bit, then created a new layer and set it to
negative.
I combined the original picture with the negative layer, merged
them, and then ran another de-noiser on it.

I saved off the result so far, converted it to a Tif (which I
should have done right off the bat), copied it a few times, and
then varied the brightness over several different levels for
each image.

I wanted to layer them in Photoshop, so I could then dodge the
dark areas and burn the light areas of each layer. I was hoping
I could then blend them together in a decently-exposed photo.

I brought all these images into Photomatix, increased the
saturation, and saved it off again.

Next, I opened the original photos with the adjusted brightness
levels back into Photomatix, and this time I just tone-mapped
it. (I find that in Photomatix, the results you get when doing
Details Enhancer is very different than when doing Tone
Compressor).

Opened both files from Photomatix up again in Photoshop, added
a THIRD negative layer, and combined all three.

Next, I again ran a de-noiser and the unsharp mask.
Finally, I ran the faux-IR thingy on it, converted it to B & W,
and sharpened it.

FINALLY...I cloned out the two trees in front of the house so
I was able to see it better.

So here is my result after all this work...But I am really
starting to wonder if it was all worth it.
I am thinking the original boring image is better than the
finished result, what do you think? 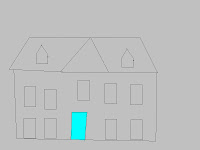