Since my blog was originally going to be one mainly about
photography, I thought I would post some of my photos on
occasion. So here, I present to you some of the ones I took
from our vacation in Hot Springs, Arkansas last August. It was
very pretty, it was enough for me to even want to live there.

We stayed in a rustic cabin on Lake Hamilton for a few days, it
was very old and creaky. (But updated to include heat, lights,
running water, etc.)

It was kind of creepy-looking at night: 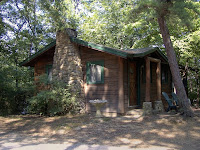 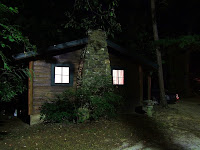 I had a pretty good time convincing The Daughter that it may be
haunted. It was peaceful enough during the daytime, but the
floors creaked, the doors all squeaked really bad, and we found
a spooky trap door in the ceiling. I told The Daughter that we
will wait until nightfall, then we will open it up and
investigate it. She passed on that idea.

The next morning, I took a photo of a nice house across the
lake, it was so serene and peaceful looking that I had to try
and capture it: 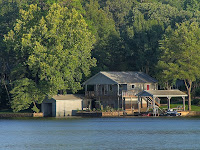 The Daughter wanted to go for a rowboat ride, and she is the one
who insisted that she would do all the rowing, so she could show
me she knew how to do it. She probably did a better job than I
would have been able to do: 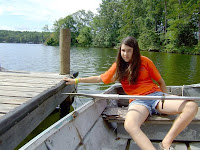 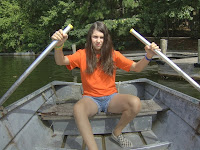 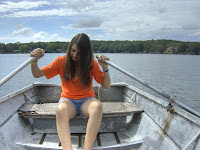 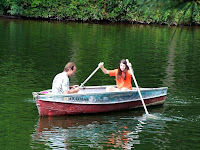 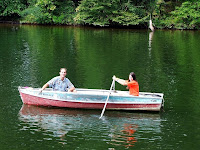 After a few days at Hamilton, we headed to DeGray Lake, and,
being the photographer, I had to get up early in the morning to
catch the sunrise: 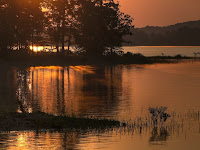 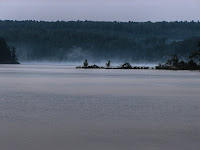 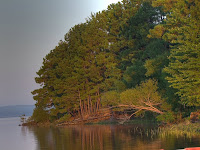 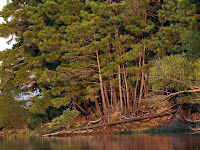 When we went swimming at the lake during the day, I found this
really cool bent tree. 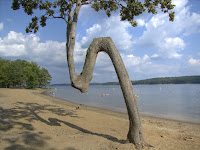 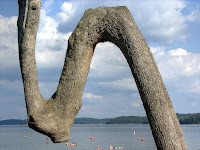 It almost reminded me of a dragon, with
two horns coming out of his head: 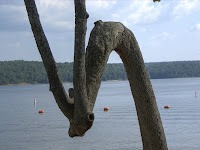 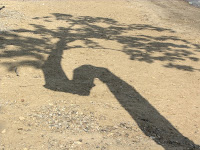 There was also a dragonfly that landed on my head when I got
out of the water, and it insisted on hanging out there for quite
some time! And now I have to end this fascinating slide show with another
early shot of a boat in the calm of early morning, and a
spider web that I couldn't resist photographing. 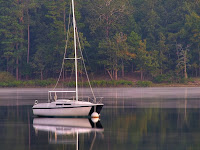 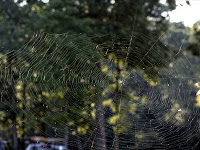 I hope this hasn't been TOO boring for you!