Lisa's blog about the Shrinky Dinks (which I have not heard of
before) has caused me to wax longingly about the toys we played
with when I was a kid in the 60's.

Oh, how well I remember my Thingmaker and my Creepy Crawlers!
This was a toy that you will never see today because of the
dangers of heat and electricity.

The Thingmaker, made by Mattel, allowed you to create your
very own rubbery toys by pouring a liquid, called Plastigoop,
into a metal mold and heating it with a small tabletop oven.
When I originally had mine, we made bugs, mainly, but later
they came out with army men and other various things.

As the goop got hot, it would solidify into rubber, then you
could pop them out of the mold, and you had your own custom-
made Creepy Crawler. We could get Plastigoop in different
colors, and even glow in the dark! 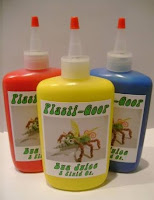 I found this picture of the Thingmaker oven online.
Am I the only one who remembers this? I guess you would
have had to be a kid in the 60's:

It was like a small hot plate, but let me tell you, this thing
got hot enough to make water drops boil on contact with the
heated surface! I don't imagine they make the ovens anymore,
but I think they still sell molds and Plastigoop online.

Here is a small photo of the different molds: 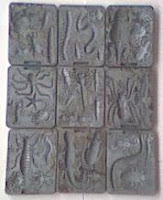 These resulting bugs were very similar to the ones that I
would create as an eight year old kid. How well I remember
the bats and the spiders and the worms...I can almost feel
their rubbery deliciousness right now in my mind! 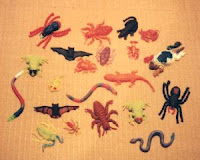 You could also embed small bendable wires in the goop
before you heated it up, and then you could pose the creepies
in various positions. I have to thank Lisa for jogging this memory
in me, I haven't thought about this in years!

Somehow, The Daughter has found my blog, a la the comment
she made on my previous post:
Well your very creative?! Who knew.

She says she found it via my Facebook page, but I don't recall
that I put this link in there, but I guess I must have.

Now, this may be awkward...how will I be able to blog about how
much I love her if she is stalking me???