We live in a great neighborhood. It is fairly safe, we have
wonderful neighbors, and we all get along pretty well.
(Of course, while WE don't have a pool, it helps that
several of our neighbors do).

Often, during the summer, we have what we like to call
'Tony Driveway Parties', which means we all get lawn chairs
and our beverages of choice, and then hang out on Tony's
driveway. This is convenient for me, since Tony lives right
next door, and the commute is pretty docile.

(The linked picture above is gleaned from this post about
raking leaves).

Several years ago, a few of us were engaged in one of these
recreational events in Tony's driveway. Earlier in the
day, Robert and Trish from across the street had invited is
to come over and go swimming on July 4, which happened to
be the next day. "Just come on over around 2," they said.

So on the night of July 3rd, as we sat there intelligently
discussing important political events (which people tend to
do when upgrading from Coors Lite to Shiner Bock), and
midnight came and went, we realized it was now July 4.

So around two AM on the Fourth, we decided it was time to
go swimming. After all, the invitation did not specify AM
or PM, so being slightly less than 100% sober, we were free
to interpret the instructions in any manner we saw fit.

I did not instigate this, I am a follower. We could see
that the TV was on inside Robert and Trish's house, so we
knew they were up.

Tony suddenly gets what he believes is a good idea: 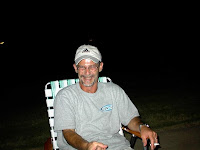 Tony & Lisa entering through the gate: 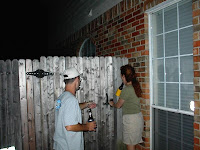 They carefully set down their glass beverage containers far
away from the pool. (I think this is what is meant by
'drinking responsibly'): 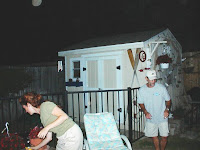 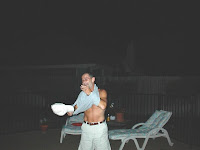 Tony jumps in. Funny how he looks like a stick figure even
though he is in mid-air: 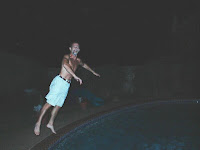 Instead, however, they made a phone call, and we had some
other unexpected guests arrive: 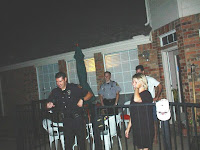 Grapevine's Finest come outside, along with Trish and
Robert, and we all have a real good laugh...ha ha ha.
Now, don't you just wish you lived on MY street? You
would be amused and entertained like this every day.

Trish and Lisa are probably discussing how lucky it is that
we were not skinny-dipping. 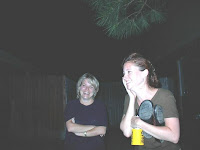 Anyway, I will have you know, that being the gentlemen that
we are, Tony and I BOTH sent Trish flowers the next day as
an apology.