I live in North Texas, the Dallas-Fort Worth area to be exact.
(Fondly called DFW by the natives here).

I am a transplant from LA, we have been living here for about 13
years. Some things I miss about California are the beautiful palm
trees, the ocean, and, of course, the weather. One thing I DON'T
miss are the earthquakes...one reason we moved out here, but
not the only one. (Can you say one-and-a-half hour commute to
North Hollywood...ONE WAY!)?

But the weather in LA was always pretty nice. Hot in late
summer (but dry) and winter nights rarely getting down even
close to freezing. But I am not in Texas by choice...if I
didn't have to work, I wouldn't be living in ANY highly-
populated urban arena. Economic realities force me to live
where I live.

I love our little neighborhood, however, it is quiet, pleasant,
the neighbors are GREAT, and we have some friends. But summer
is unbearable...stifling...muggy...filled with mosquitoes between
late February and late November.

But what's this about global freezing, you wonder aloud?
Yes, winters can be quite cold here. Snow flurries happen, but
usually frozen stuff is just ice...all of the slippery misery
without any of the fun beauty of snow.

But I never complain about the cold weather. I don't like to
freeze, but I like it more than summers where the temp does not
go below 85 degrees even in the middle of the night. You can't
even open a window at night like we used to California, it just
doesn't cool off. The AC out here has to run 24-7 for about 8
months out of the year.

We have about a two-week window twice a year where we
don't have to run either the heat or the AC...The beginning of
March, and then again towards the middle of November.

Two summers ago we had a power outage in August. Within
a few hours, the temp inside the house was over 90 degrees.
Power was out for two days, we had to go rent a hotel for a few
days. I don't know how people around here existed before air
conditioning. The only feasible way I would have been able to
sleep would have been in a bathtub full of water.

So I don't mind the cold. GREAT sleeping weather!
Last night we had our coldest temperatures since I have been out
here...15 degrees. Yeah, I know, lots of you in colder parts of
the country are shaking your heads in bewilderment, but
personally, that is the coldest temperature I have ever
experienced in my life.

So, being a wanna-be photographer (as well as a wanna-be
musician, writer, dot com executive) I had to go out and take
some pictures of the icy street gutters: 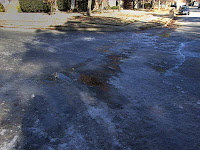 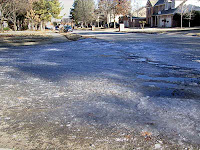 I like the patterns on the ice with the leaves encased within
the frozen water: 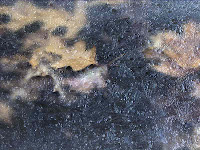 Last night I let an outdoor faucet drip ever so lightly, in the
hopes that I would find this beautiful frozen sculpture, with a
stalagmite of ice reaching gracefully up to the spigot, gently
caressing the metal pipe in a cold lovely embrace. Alas, all I
found was a dripping faucet with a frozen puddle on the ground.