Jiggling the Handle - Part One

I consider myself to be a pretty handy guy. When I was
growing up, my dad always made me help him with various
projects he was doing, mostly involving carpentry. I learned
a lot from him about construction, woodworking, drywalling,
and how to use various tools and power saws.

It was not until I looked back years later that I even came
close to realizing what a skillful man he was.

In addition to this excellent education, due to the many many
jobs I have had in my life (and this, too is a story for a
future post) I am semi-well versed in electrical wiring and
plumbing. Very basically, electricity is to wiring as water
is to pipes...if electricity has a place to go, it will go.

So this is pretty basic simple stuff, I can do most home
repairs, such as replacing switches, faucets, fixing leaks,
etc. However, even though I may be capable of said repairs,
you really have to weigh the different options before deciding
on which course to take to resolve the issue:

Option One: Do nothing. Live with it. Not worth the trouble.

Option Two: Fix it myself, if it is a minor enough task that
I think I can handle within a reasonable amount of time.

Option Three: Hire somebody. This is when the problem is
severe enough that I know it HAS to be done, and complicated
enough where I know it would take me somewhere between
two days and Never to get it completed if I did it myself.

I am not completely dim-witted, if there are mechanical issues
in the house that need to be addressed, I am aware of them. I
just choose to selectively ignore them. So if something needs
to be done, I will ask my bride to submit Form 27-a: 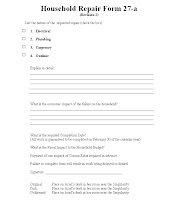 For example, she came to me not long ago and said that some of
the light switches are not working. They work if you flip it up
really hard, and then you have to flip it down really hard to
make it turn off. The switch is obviously old and the contacts
are worn. It does warrant a replacement: 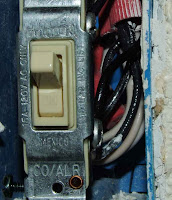 Electrical repairs always bug me, because the amount of existing
wiring in the house is finite. You never know how much slack you
are going to find when you remove the old switch. It is tough to
coax the thick wire around the little screw, and as we all know,
you can only bend and un-bend the wire so many times before it
breaks. If I cannot pull any more wire out of the wall, then the
switch will have to be decommissioned and rendered useless,
along with whatever appliance it has been controlling.

I had her submit the form as a way to have a paper trail, but I
added an addendum that the work would have to be delayed until
next spring, when Daylight Savings Time kicks in. (The nature of
the requested repair dictates that power would have to be shut
off in the kitchen.)

As a result of this, the clocks on the coffeemaker and the
microwave would have to be reset. It would be counter-
productive to go through the hassle of setting these clocks
only to have to RE-set them again just a few weeks later, so I
penciled her in for March 14, 2010.

I did not remind her that on that date, I will be in California
with The Daughter to visit my mom, which unfortunately will have
a negative impact on the requested repair. We may have to live
with the loose switches for another six months.

Having narrowly escaped (for now) the electrical repair, my bride
then submitted another form for the upstairs toilet. According
to the form, when you flush, the water in the tank continues to
'run'. I reviewed the documentation and scheduled an initial
inquiry. I was tempted to kick the form back to her as Denied
due to an inaccuracy in the terminology, but I was feeling
generous that day and I did the inspection.

I discovered that the problem could be alleviated by just doing
a slight 'jiggle' of the flush handle after the tank had filled
up. (As I get older, I find that I am getting to be more and
more like electricity...I like to follow the path of least
resistance).

Now I am at an impasse...for me, it is much easier to just
jiggle the damn handle then it is to turn off the water valve,
reach down into the tank and mess with that gooky rubber and
plastic garbage down there, replace the tank gasket, etc etc.
I would much rather be spending my afternoon taking a nap.

(See Option One above).

But, as you all know by now, I am the perfect husband, and I
always do what my family requests (assuming the proper
paperwork has been submitted). I ran down to Lowes, got the
needed equipment, and performed the required repair.
All was well.

As I laid down to take a well-deserved nap, I was suddenly
startled by the sound of water gushing against the wall in a
pretty strong stream...

I am now realizing that this is dragging on for longer than I
intended. In the interest of not creating a post that is TOO
LONG...I must publish the second episode tomorrow...