Dammit Jim, I'm a drummer, not a Midi Programmer!

I have been playing the drums for a loooonnngg time, for sure
since I was about 12 years old. The first drum set I ever got
was purchased from a swap meet in California for about 30 bucks.
It had the standard bass drum, snare drum, floor tom, but only
one bass-mounted tom tom, and only one crappy cymbal.

Ah, but that was all I needed. It was more than enough for me
to learn how to do basic beats, and it carried me through many
years. It was not until I was around 17 that I had scraped
together enough money to buy a newer set, and I quickly
discovered that the most expensive part of the set was going to
be buying quality cymbals.

When I got out of high school in 1974, one of my long term
buddies and I formed a band...I was the drummer, and my buddy
Ray was the keyboard player. We struggled to find a decent
guitar player and bass player, but we managed to dig some
people up and got our little quartet going. But that is a whole
other story that I may get to in the future.

For right now, we are focusing on the drums.
(In the UK, they refer to them as drum 'kits', and I never took
to that word. To me, it sounds kind of cheap, but what the hell
do I know. They invented the language over there).

For me, playing the drums is just as much as a visual thing as
it is an audio experience. The cymbals are shiny and they look
cool when lights reflect off them. A drumset is physical, it is
tangible, it is hardware.

Yeah, I know, so are other instruments, but with drums, it is
different. There are many different parts, and each piece, when
disassembled and held in your hand, has its own separate
personality. You can hold a cymbal in your hands, and it is a
flashy metal disk that is pretty and reflects colors.

There are ways to tune the individual drums so you can get
specific type of sounds out of them, but as you can imagine, it
is limited, and not easily changed to something else. When you
are playing, the feel of the sound is going to depend more on
how you hit the drums.

Being a drummer, I understand that most people don't actually
pay attention to the drummer. As long as you are keeping the
beat and are not overpowering, a drummer is not really noticed.
But mess up big time, and you are noticed! I know a guitar
player can miss a note, a keyboard player can hit a wrong chord,
but mostly only the band members may ever catch it.

But the drums are a dynamic instrument, a flubbed off-beat
mistake will be a glaring error that will throw off the timing
for everyone, and make the entire band look bad.

Now you take those new-fangled electronic drums that are out
there these days...
I remember them being used in the 80's on different disco songs,
and I have to say it was very sad. The artificial sound, the
steady, un-changing patterns (which point to a looped
recording), the boring sameness of the beat...
You knew that there was nobody even playing the drums in these
songs, it was all synthesized.

Not only did they sound artificial, but they looked boring too!
Electronic technology is wonderful, but the goal here was not to
create anything that looked cool. With the electronic drums,
all the fun was taken out of drumming.

However!! Not to worry, because that was then, and this is now: 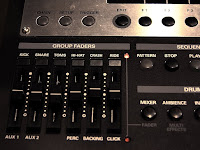 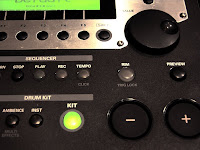 My reluctance to embrace the future has been rectified, my
ignorance destroyed. I have since discovered, thanks to the
leader, singer and guitar-player of my current group, that these
electronic drums have changed quite a bit since the 1980's. Not
only do they sound exactly like acoustic drums, but the sounds
are easily changed to something else, which makes for great
convenience when doing different types of music.

Once I actually played them, I discovered that they sound and
feel exactly like acoustic drums. In fact, if I closed my eyes,
I would not be able to tell any difference at all both in sound
and the feel of them. And not only that, it was so easy to move
them, adjust the volume, record them. I have to say I was
enlightened.

Now, there are few issues that need to be brought up, however
minor they may be. We now have something that was likely one
of the first instruments ever devised by man...that only required
a thing to hit, and something to hit it with...in need of power.
Which means more things to plug in, more cables to work with,
and in some cases, requires some technological skills that a
dumb drummer never had to deal with!

Instead of tightening a drum head with a drummer's key, we are
now spinning electronic dials, stringing cables between amps and
electronic boxes, dealing with short circuits, crimped
cables, and mis-matched connections. 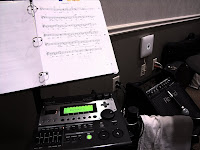 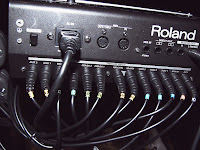 Dammit Jim, I am a drummer, not a Midi programmer!

Ah, but let me say this, Roger, my beloved bandmate, friend,
brother...
I love the electronic drums...they are easy to play and move...
The only thing we need to work on is to make them LOOK like old
style drums...
For recording, it doesn't matter, but for live gigs, someday, I
will get an old set, do some chopping, hacking and patching, and
see if we can disguise all those pesky electronic gadgets.