I took one more look at the image from this previous post, and after I enlarged
it, I discovered a few more interesting things that were not readily apparent
in the smaller image! For example, in this enlargement of The Robbery, I was quite
flabbergasted to discover that, upon closer inspection, the would-be robber was
only using a water pistol!:

It also appears that the "Mail Employee" is dealing with a little contraband: 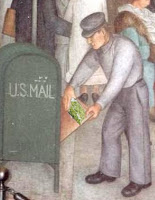 When I enlarged the portion of the Man on the Box, I found that he was actually
playing a little game of Jacks!: 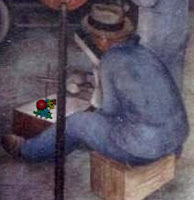 I also see that the Mobile Army Surgical Hospital was on the scene after the accident:

And, finally, it looks like Waldo has been around a lot longer than any of us
initially realized: