Many people have recently blogged on some interesting
automobile issues dealing with 'inattentive' drivers. I have
commented that anything that has to do with cars and driving is
always good fodder for discussion.

I would like to expound on this, if I may, but would like to
shift my attention to that under-appreciated anomaly, the lowly
Pedestrian.

Now, being the excellent drivers that we are, we all know that
technically, if we are in a parking lot, the Ped always has the
right of way. If there is ever an accident, a whoopsie, or any
type of contact between your car and a Ped while in a parking
lot, the driver is the one who is going to be suspect.

(Note that this is usually NOT true on the highways...)

Since most Peds are aware that they are in this esteemed
position, they tend to make the fatal mistake of assuming that
the drivers going through the parking lot really do have the
mental capability to operate their vehicles safely.

Now we have to stop here and discuss the 95% Rule. But before I
do that, I need to make a qualifying statement:

I make no assumptions on the intelligence of other people.
The very fact that a Person is a Human Being should be enough to
qualify them as being 'intelligent', as in 'not stupid'.

We know that any Human Being that is allowed to go out in public
without having to be under the direct supervision of someone
else is probably also capable of keeping themselves safe from
harm. I would imagine that if this Person is alone and
ambulatory, they are likely alert enough to protect themselves
against most perceived threats.
(We know we could be harmed by other Human Beings, but we
should be able to prevent anything from damaging our body by
our own lack of attention).

So we can all agree that most people are more intelligent than
say, Amoebas, otherwise we would not be 'Human'. Then why
do we see people cross the parking lot without even LOOKING
to see if there is any traffic coming? Can anyone really be that dense??

The 95% Rule states that whenever you are interacting with
another Human Being, there is a 95% chance that they are either
not paying attention, are distracted, are not aware of their
surroundings, or are otherwise disengaged from reality, thereby
displaying the illusion that they are not intelligent.

The following are actual photos that I have taken in one of
our neighborhood shopping centers of people that are so
inattentive that they just blithely cross the street with no
regard for their own safety. Sometimes they don't even look!

Notice the two young ladies crossing with their backs to traffic: 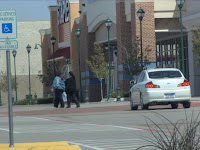 And this gentleman is focused on his cell phone: 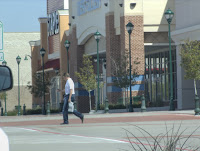 How can people do this? Do they just assume that the drivers
all see them and will watch out for them? I would not assume
that.

The urge to 'look both ways before crossing' is so deeply
ingrained in me that I have the compulsion to do this if
crossing any kind of designated pathway, not just the street
(such as hiking paths, sidewalks).

In fact, if I suddenly found myself alone on the planet, and I
knew there were no other Human Beings around, I imagine it
would take quite some time for me to un-do this urge...even if
I knew there was no one else around, I would still automatically
'look both ways before crossing'.