The Eyes Have It

I got back from my little vacation a few weeks ago.
Got home on a Sunday, had to go to work the next day.

As I was driving in to work early in the morning (it was still
dark outside), I glanced over to my various gauges in the car,
as one normally does while driving. And I noticed a problem
with my vision.

The illuminated gauges in the dark car will cause any vision
abnormalities to become apparent. I was having some trouble
making out the time on the digital clock.

Now, I have pretty good sight...I have taken to wearing reading
glasses over the past five years, but only for close-up reading.
My distance vision always has been great, and continues to be
great. I only need to wear them for reading.

And what I was noticing out of my right eye was not any kind of
blurring or out of focus...but it looked as if I was looking
through wax paper. You know how when you first wake up in
the morning, and if you have like mucous in your eye...or if your
eyes were watery...it was kind of like that.

I thought it might have been one of those 'floaters' that
everyone has, but this was much worse. I really like being able
to see, so I was concerned.

Once I got to work and brought up my computer, I was able to
investigate this some more. I went onto the APOD site
(Astronomy Picture of the Day) which is usually the first thing
I look at. I made a screenshot of today's shot, and was able to
manipulate it to give you an idea of what I was seeing: 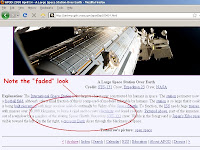 Note how nothing is out of focus...but sort of just 'covered up'.
So I gave it a few days to see if it would improve, but it did
not. I searched Web MD...could it be a cataract starting to
form? Was there a problem with my retina? EYE CANCER???

About a week later, I very coincidentally got a call from my eye
doctor reminding me that it was time for my annual exam! I was
lucky enough to get an appointment for only one week away.

As the day of the appointment drew closer, I noticed that the
problem seemed to be improving, much to my relief...but oddly, I
did not want it to go away completely before the doctor saw me,
otherwise I may never know what it had been. So the
appointment was yesterday afternoon.

By the time I got there, the distortion was hardly even
noticeable anymore. When he looked into my eye with his special
camera, he discovered that what had happened was I had a vein
at the back of my eye that had somehow become either
obstructed, or weakened, and it had bled a little bit into my eye.
This photo taken from the doctor's computer shows the
discoloration from the leaking blood that had obscured my vision:

It's actually a pretty cool photo...to me it looks like
Mars...or a breast. He says it may have been caused by the
pressure changes from flying, as I noticed it the next day after
I got home from Vegas. As long as it is going away...which it
is, I should be OK.

I really wrote all of this rambling stuff so I had a good excuse
to show you the picture...it really is cool-looking, because I
am fascinated by the human body, science, and nature stuff.